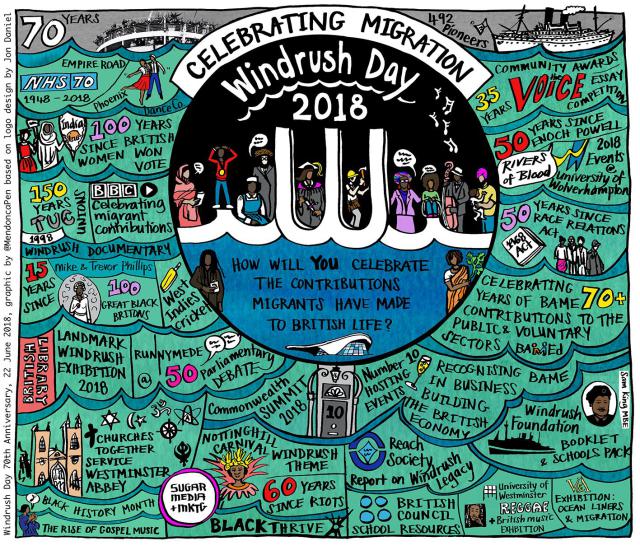 We’re looking for academic and/or creative contributions that document, respond to and/or examine the activities associated with Windrush 70.

Background to the project

This year marks the 70th anniversary of the arrival of MV Empire Windrush at Tilbury Docks on 22 June 1948, carrying more than 490 Caribbean men, women and children.

Since then, many have researched, recognised and preserved their stories; in 2011 a photograph of the Windrush was voted by the public as one of the 100 most iconic symbols of British history; and a model of the Windrush was included in the opening ceremony of the Olympic Games and Cultural Olympiad in 2012.

Yet, this year, increasing numbers of people who were born in Commonwealth countries (particularly the Caribbean), who migrated to the UK as children between 1948 and 1971, are being threatened with deportation. Thousands have signed petitions calling for the Government to stop deportations, change the burden of proof and establish an amnesty.

Windrush 70 is an attempt to challenge the negative rhetoric around migration – by recognising and celebrating the contributions made by the Windrush Generation and their descendants.

This year, for the first time ever, Windrush Day will be celebrated during a special Churches Together service at Westminster Abbey, and organisations and institutions across the country have been planning events, exhibitions, publications and awards – including the NHS, The British Library, Phoenix Dance Theatre, Chelsea Flower Show, The Voice newspaper and the British Council.

Would you like to help document, respond to, and/or examine these kinds of Windrush 70 activities – from an academic and/or creative perspective?

If you’d like to contribute, please send an abstract of 300 words telling us about your idea (include an example of work if your contribution is visual/audio), plus a 50 word bio to leedsbeckettwindrush@gmail.com

You’re also welcome to send your questions to us, Patrick Vernon OBE, Dr Angelina Osborne and Pen Mendonça on the email above.

Your ticket for the: Windrush 70: Call for Contributions